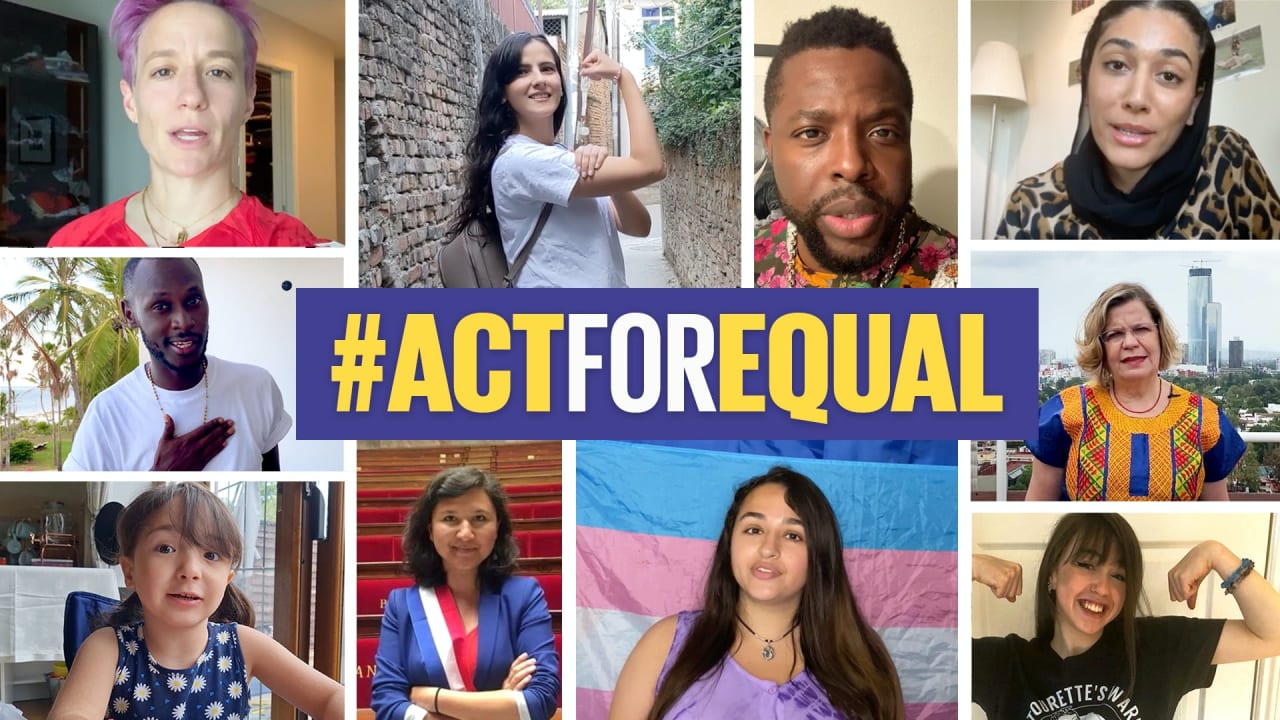 Despite some progress, no country has achieved gender equality and women’s rights are still undermined around the world.

The pandemic has threatened existing progress and with less than a decade left to achieve Goal 5 (Gender Equality), we must take action today to secure a better tomorrow for women and girls everywhere. As we begin to recover from Covid, we must put gender equality at the heart of our recovery plans.

Between 30th of June – 2nd July, world leaders will gather in Paris for the Generation Equality Forum – the biggest forum for women and girls in recent history. This Forum gives us the opportunity to accelerate transformative change for gender equality.

Ahead of the Forum, inspirational activists and leaders have come together in a new film. ‘#ActForEqual – Generations Together’ – produced in collaboration with Project Everyone and UN Women – delivers a key message; that we want to live in a world where women’s rights are equal rights and where every girl and woman can make their voices heard and achieve their dreams.

The film brings together people from across generations and sectors from 7 year-old Sama to renowned activists and leaders like Leymah Gbowee, and Chair of the Elders Mary Robinson to prominent figures such as Megan Rapinoe, Winston Duke and Jazz Jennings to grassroots campaigners; each contributing to the message of why we need to #ActForEqual.

Notable leaders, activists and celebrities in the film include:

We want to hear from you! Share the film, join our TikTok challenge and tell us why you think we need to #ActForEqual.

This blog is written by Alice Macdonald, Director of Policy and Campaigns at Project Everyone, the organisation behind the Global Goals campaign. She has spent the past 15 years working across politics and campaigns at both the local and global levels.

As the G7 summit ends, football fever is kicking in as the Euros kick off. One set of Goals we really need to see scored are the Global Goals for Sustainable Development – an historic plan agreed by every single UN member state –including all the G7 countries – in 2015. This plan isn’t a theoretical ‘nice to have’ it is a roadmap which will deliver the fundamentals we need to crack the biggest crises we are facing – Covid, injustice, climate change and nature loss.

The G7 could have helped us advance progress to these Goals especially Goal 3 (Good Health and Wellbeing) and Goal 13 (Climate Action). But leaders fell short. We needed a real deal on vaccines to protect the whole world. But what we got was a promise of 1 billion doses over the next year – well into 2022 – far short of the 1 billion doses needed by the end of this summer and the further billion by the end of the year. Beyond doses, we also needed the G7 to commit to sharing the knowhow to produce vaccines and to agree a global financing deal to fill the estimated $50-66billion gap that exists if we are to vaccinate the world. It’s people’s lives that are at stake – more people have been vaccinated in Cornwall where the summit took place than in 22 African countries combined.

On climate, the level of ambition was also just not high enough and details lacking. We need a green recovery from Covid but, as analysis shows, since the pandemic G7 countries have spent more money on fossil fuels than green energy. One of the targets under Goal 13 is to mobilise $100 billion annually for climate action to support developing countries – a key ask for this summit – but we are still left without a clear plan to meet this woefully overdue promise.

So warm words and good photo ops but not the transformative action we needed for people and planet or to put us on the trajectory to help achieve the Global Goals.

As the G7 ends all eyes turn to the COP26 Climate Summit in November – it’s clear that leaders need to ramp up their efforts. As the UN Secretary-General said at the G7, ‘We are coming to the point of no return’. Campaigners gather in Cornwall to mark the 3.7 million people who have lost their lives to Covid (Credit – Bad Wolf Horizon).

One point of hope is the activism and campaigning we have seen in the run up to and at the G7. Project Everyone is a member of the UK Crack the Crises Coalition – which brings together over 75 charities representing 12 million people to campaign together to crack the crises of Covid, injustice, climate and nature loss. A campaign that captures the spirit of the Global Goals – that we can’t tackle one crisis without tackling them together. It’s been refreshing to see development, gender, justice, climate and nature organisations unite to put pressure on our leaders. We need to keep that up – the G7 has been a huge disappointment on many levels but campaigners will keep on fighting. At the risk of one football pun too many – it takes a great team to score Goals and this team will stay united so that we achieve a better future for people and planet.