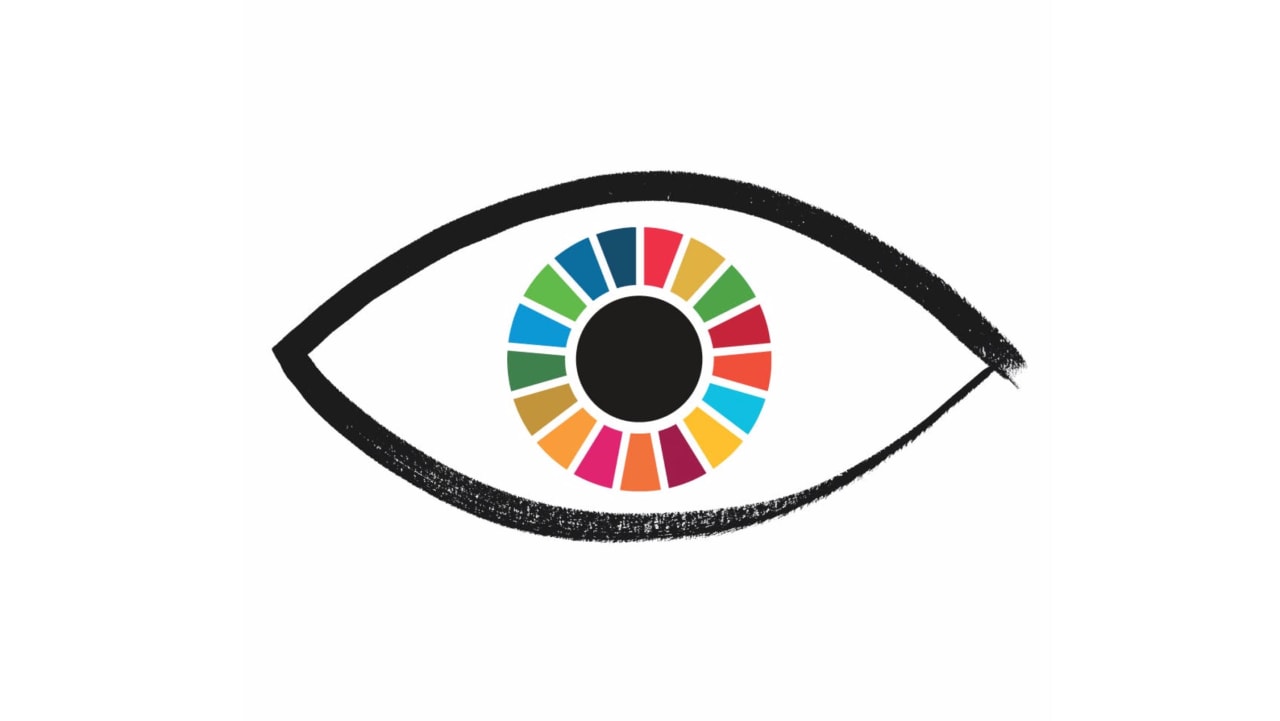 Signatories include world-leading activists and campaigners from Dr. Jane Goodall DBE and Malala Yousafzai, to leaders and organisers of movements including Patrisse Cullors, Black Lives Matter; Dr Obiageli Ezekwesili, Bring Back Our Girls; Tarana Burke, Me Too and Alexandria Villaseñor, Fridays For Future.

In a dramatic act of global unity, 2000 campaigners and public figures from over 140 countries are backing an open letter signed by 20 world-leading activists. The letter declares a state of “emergency” for people and planet. It comes one week on from UN Secretary-General António Guterres calling on the international community to make the 2020s the “decade of action” and 2020 the “year of urgency”.

Campaigners want to see political leadership at key moments this year including COP26, the Gavi replenishment, Generation Equality Forums in Mexico and France, the UN General Assembly, and a landmark biodiversity conference in China.

Dr Jane Goodall DBE, founder of the Jane Goodall Institute, said: “Now is the time for action if we are to achieve the Global Goals that world leaders have committed to. Not next year, not in five years – but now in 2020. We all have a role to play. My global programme for young people, Roots & Shoots is planting 5 million trees in this year alone. Those in power must now step up and play their part too.”

Tarana Burke, founder of the MeToo Movement, said: “The Global Goals are a solutions-focused plan that the world needs. They are as much about what is happening in the USA as in Uganda. They build on a vision of a world in which women and girls can live free from violence, harassment and discrimination, but we all know that is a long way off. That’s why we must use these Goals as a tool to hold our leaders to account and to boost all our efforts. I’m proud to stand with climate campaigners, human rights defenders, education activists today to send a clear message to leaders that these Goals are all our Goals. We are ready – and we are watching – for action.”

Patrisse Cullors, co-founder of Black Lives Matter and founder/chair of Reform LA Jails, said: “The battle for justice and equality becomes more urgent with every passing day. I am proud to join together with 19 other activists today, across issues, across continents and generations – to demand world leaders deliver on their promises contained in the Global Goals. We are doing our bit. They must do theirs.”

Dr. Obiageli Ezekwesili, co-founder of Bring Back Our Girls, said:“Governments across the world are simply not acting quickly enough or with enough intention to meet the 2030 deadline for the Sustainable Development Goals. We need our leaders to find innovative financial solutions and show us how they will commit to this next decade of action. I am proud to join with 19 other climate campaigners, gender activists, human rights defenders and anti-poverty advocates in signing this letter. These Goals are all our Goals and can only be achieved together.”

Richard Curtis, SDG advocate, screenwriter and co-founder of Project Everyone, said:“We are in an emergency for people and planet – the solution to which is the Global Goals – the historic plan to defeat poverty, fix inequality and combat the climate crisis. These 20 activists and 2000 supporters represent the universal and indivisible nature of the Goals – and the passion from all sides that 2020 must be a transformative, radical year for change and progress and new finance – for people and planet. In 2020, leaders will be watched by people all around the world who expect them to deliver dramatically. It’s also a clear commitment that this diverse and deeply committed group will themselves press hard throughout this crucial year to kickstart a Decade of Action for the Goals.”

The open letter has been issued to highlight the need for immediate action, including at key 2020 moments, if the world is to meet the Global Goals. It demands sustained innovation, financing and action over the crucial decade ahead to 2030. Recent reports underline the need for swift action; at least half the global population does not have access to essential health services, hunger is on the rise after a prolonged decline, and at the current rate of progress, it will take almost 100 years to close the global gender gap. Meanwhile, greenhouse gas emissions are reaching record levels and key ecosystems are on the verge of collapse with one million species in near-term danger of extinction.

The open letter is accompanied by a public campaign asking citizens to show their support by sharing the letter and to join this effort for people and planet by using #GlobalGoals. The full list of signatories can be seen at watch.globalgoals.org.

A campaign film has also been directed by Richard Curtis.

ABOUT THE GLOBAL GOALS

On September 25, 2015, at the United Nations headquarters in New York, 193 world leaders committed to the 17 Sustainable Development Goals (or Global Goals). These are a series of ambitious objectives and targets to end extreme poverty, fight inequality and injustice, and fix climate change by 2030.

The open letter is part of a broader campaign for people and planet running throughout 2020 in support of the Global Goals, which is backed by a network of partners from across the world. The Decade of Action launched by the UN Secretary-General calls on governments, businesses, civil society and individuals everywhere to create an unstoppable force to reach the Goals by 2030.

Project Everyone, coordinator of the open letter, was co-founded by writer, director, and SDG Advocate Richard Curtis, Kate Garvey and Gail Gallie with the ambition to help achieve the Global Goals through raising awareness, holding leaders accountable, and driving action. Find out more at project-everyone.org.

Notes to Editors: Media inquiries should be directed to goals2020@freuds.com.

The full list of signatories can be viewed at watch.globalgoals.org.

THE OPEN LETTER TO WORLDS LEADERS

Dear World Leaders, This is an emergency.

We are activists for different causes from across the world, writing as one for the first time to demand your immediate action in this critical year.

5 years ago, at the United Nations, 193 countries committed to the Global Goals for Sustainable Development.

A historic plan to end extreme poverty, conquer inequality and fix the climate crisis. Look at our world now.

Our climate is heating up.
Natural disasters are increasing.
Millions flee their homes.
Children suffer without vital food and healthcare.
Activists are murdered for their views.
Girls and women are refused an education and subjected to discrimination and violence.

But we still dare to hope that in 2020 you will act decisively and courageously and kickstart a Decade of Action.

We need you to act faster.
To find the finance. To track implementation. To unlock radical solutions.
We are watching you. And we will fight every day, for people, for planet.
There are not just a few of us – there are millions with one voice and one question.
How will you keep your promise and deliver dramatic progress towards the Global Goals this year?

We await your urgent reply. 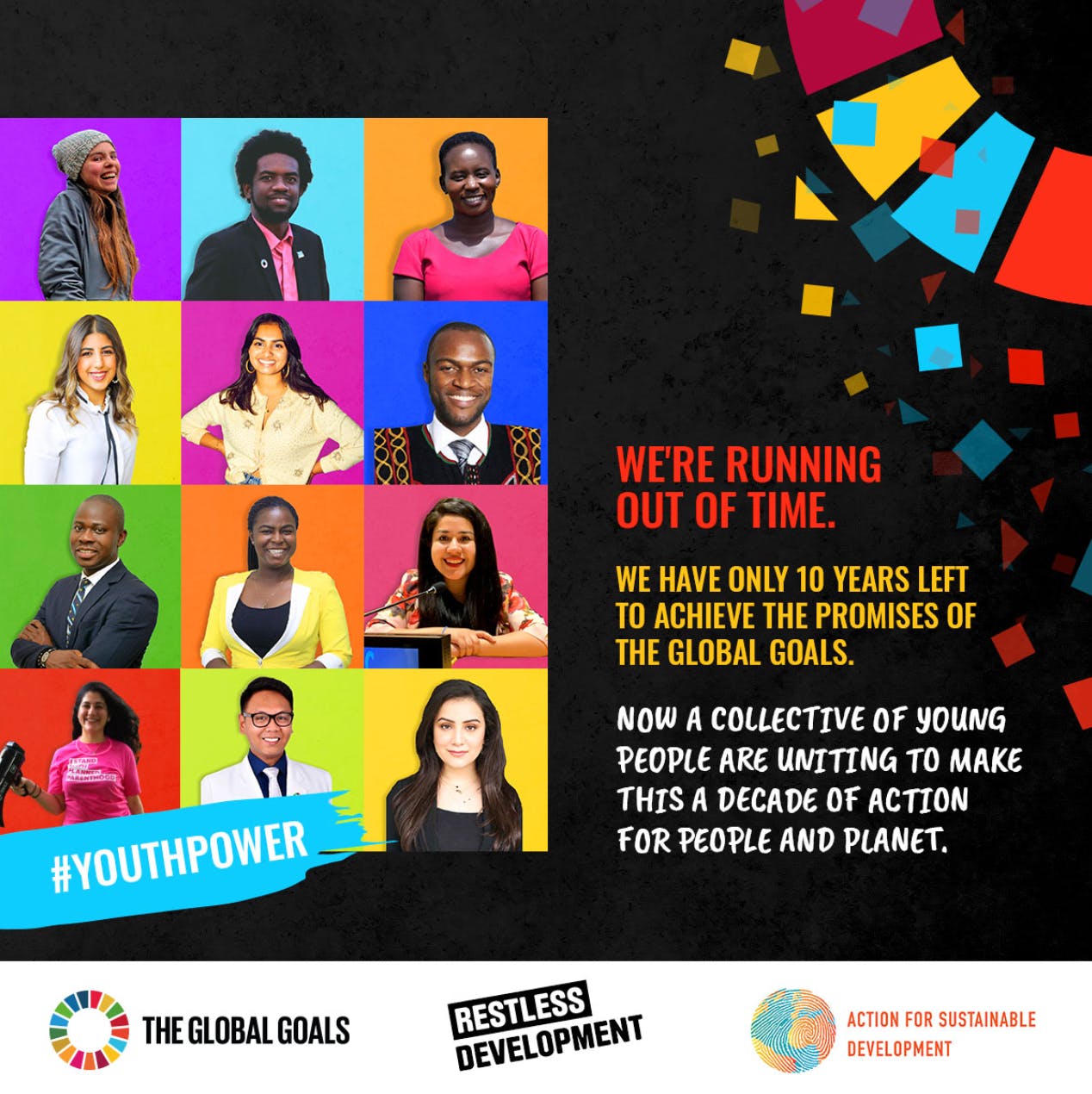 Today, leading young activists under the age of 30, from twelve countries have formed the Youth Power Panel, launching a global initiative to accelerate youth action for the Global Goals in 2020.

Their announcement comes in response to a speech from UN Secretary General Antonio Guterres, calling on the General Assembly to make 2020 the year of urgency, kick starting a decade of action to deliver the Goals by their 2030 deadline.

They aim to empower fellow youth activists around the world by connecting local grassroots campaigns with funding; amplifying youth actions that are creating change; developing tools to help young people track the goals and holding their leaders to account for their delivery. Andrew Tangang “I’m a devoted development practitioner with over 7 years’ experience in conceiving, implementing, monitoring and evaluating youth/community development initiatives. As a researcher, my interests include decentralisation (local governance) and youth development.” Abideen Olasupo“I have over 7 years experience in the Development, Innovation and Strategy Consultant Business Sector. I am an Harvard Business School alumnus (Entrepreneurship Essentials Course) and a serial entrepreneur. I was nominated and selected as the 8th Most Influential young Nigerian and 100 Most Influential Young Africa in 2018.” Bruna Elias “I’m a Programs Manager at the UN Global Compact in Lebanon with a multidisciplinary background in architecture and sustainability. Also an SDG advocate immersed in the challenging world of corporate sustainability and the agenda 2030.” Donya Nasser” A passionate advocate for youth empowerment, gender equality, and racial equity. For over a decade, I’ve worked diligently to ensure the rights of young people, women, and marginalized communities to reproductive health services, leadership representation, and intentional engagement.” Henry Jevanic“An environmentalist, youth leader and community activist dedicating my efforts towards to increasing youth participation in creating a more peaceful and sustainable society. I have a passion for volunteerism and a drive to inspire others to become positive changemakers in their society.” Inés Yábar“I’m a Peruvian activist, combining her studies, volunteering and job to continue learning, sharing and acting towards a more sustainable future. You should always do something and live your days with meaning.” Natalie Robi Tingo“I am a mother, Feminist, survivor. Passionate about youth & Human Rights. I use my skills & experiences to mobilize, organize for action, lead implementation of sustainable interventions to end Poverty through ending violence & discrimination” Ria Sharma“A 27-year-old working towards the rehabilitation of acid attack survivors in India. I eat, sleep and breathe my cause.” Rosario Del Pilar Diaz Garavito “Rosario is a young peruvian civic leader, Founder & Chief Executive Director at The Millennials Movement organization awarded with the UN My World Survey Volunteerism Award on 2014 by the UN Millennium Campaign for engaging more than 36000 people in Perú in the definition process of the 2030 Agenda.” Ruth Tawiah“Impact-driven youth development activist who loves working with and for women and girls.”

Keep up to date and see how you can get involved